Almeria is located in the far Southeast corner of the Iberian Peninsula. It has the highest hours of sunshine and lowest rainfall in Europe, making a semi-arid desert-like landscape.

Europe's most powerful telescope has been installed here, due to its skies are the clearest in Europe.

Almería has also an annual average of 3,000 hours of sunshine, this is the reason why it is also home to Europe's largest solar energy plant.

This hot climate makes of Almería one of the most productive agricultural zones in Europe. This intensive agriculture means that a good part of the coastal territory is a field of plastic greenhouses.

Almería has the most outstanding wildlife areas in Andalucía and the largest coastal reserve, the Cabo de Gata-Níjar Natural Park.

It is located at the foot of a mountain range, crowned by the Alcazaba, an Arab fortress with three huge walled enclosures built by the Calaph of Cordoba, Abd-erRahman 111. From here, we have a beautiful view of the city and of the Cathedral.

The Cathedral was built in 16th century. It is strangely fortified due to the numerous attacks of the Turkish and North African pirate forces. Even its corner towers one held canons. The Cathedral has gothic style and renaissance façade.

Almería and Granada province are famous for its cave-houses, homes dug out of soft sand-coloured cliffs. They often have a conventional façade with windows and tiled roof, while above are chimneys that jut up from the earth behind. These chimneys are dug for interior lighting of the cave. These houses are insulation from dry desert-like heat of this province.

The most interesting cave-dweller settlements are the cave-houses in the Barrio de la Chanca area in Almería city, Alhabia, Benahadux and Gádor, near the recently excaved site of Los Millares and in the Almería section of the Alpujarras, at Fondón and at Láujar de Andarax.

This prehistoric settlement is situated 20 kms northwest of Almería, between the villages of Gador and Santa Fe de Mondujar. It is the largest Bronze Age settlement in Europe with a prehistoric fortress built 1,800 years before Christ. It was Their ability to smelt and shape cooper that makes Los Millares a crucial stepping stone between the Stone and Bronze ages.

This Hispanic-German astronomic observatory is located at the highest point of the Sierra de los Filabres (2,168 m.) in Gérgal. This is the most important observatory of its kind in Europe with its high-power telescopes and taking advantage of one of the clearest skies in Europa for star-gazing.

In the 1960s the Tabernas Desert has been the site of many Western movies. Italian movie directors filmed their own version of the North America Wild West, attracted to its virtual lunar landscape with canyons and rocky wastes. Now these film sets have been turned into a tourist attraction. Famous actors were all here.

Around 100 films as "A Fistful of Dollars", "The Good, the Bad and the Ugly" and "The Magnificent Seven" has been made here and well known actors as Clint Eastwood, Charles Bronson and Raquel Welch performed also here.

It is located between the mountains of the Sierra Nevada, Gador, Filabres and Alhamilla is one of the most dramatic landscapes in Spain, the desolate Tabernas Desert, the only semi-desert in Europe. It has a poor soil, low rainfall and temperatures that range from -5ºC to 48ºC. It is a surreal landscape with weirdly eroded ravines, dry river beds and slopes devoid of vegetation. This desert is one of the most geologically interesting landscape in Europe, due to is clearly shown process of natural desertification and erosion.

Here we can find a huge variety of xerophyte flora accustomed to surviving in semi-arid areas. Due to the high salinity level of the soil, salt-resistant plants can also commonly be seen here.

It is located in the eastern end of the Cordillera Subbética in the north of Almería province. It has 22,670 ha with the highest peak of María at 2,045 m. the temperatures are quite extremes, from 18ºC in winter to 39ºC in summer.

The park is covered by an extensive pine forests and Mediterranean woodland, very well preserved. A broad variety of plants, including some unique to the Sierra can be found here. There are also a diverse variety of birds and in 2002 it was declared a special protection zone for birds. An outstanding population of butterfly can be also found in this park, some of them endemics to this place. The spur-thighed tortoise living in this place is in danger of extinction and that is the season why there is a breeding centre for these tortoises in the park.

Numerous archaeological remains from Palaeolithic and Neolithic times have been found testifying the important nucleus of population that once lived here. Also in Cueva de los Letreros and La Cueva del Gabar have been found paintings. 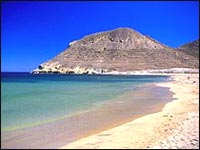 It is located in the southeast corner of Spain and covers 45,663 ha. It is a wild and isolated landscape with original geological features. The mountain range has sharp peaks and crags and it falls steeply to the sea creating jagged 100 m-high cliffs, interrupted by hidden coves with white sandy beaches. Offshore are numerous tiny rocky islands and, underwater, extensive coral reefs teeming with marine life.

This area is a large semi-desert area due to the high temperatures and the low rainfall, the lowest in the Iberian Peninsula, with coastal dunes, steep cliffs, beaches, saltpans, salt marshes, dry river beds, inland arid steppe and a substantial marine zone of 12,000 ha. The Saltpans of Gata Cape are one of the Spain's most important wetland areas for breeding and migrating birds. This saltwater lagoon is of outstanding ecological interest, particularly for its birdlife.

All types of fishing, diving, snorkelling, sailing, sea-kayaking, windsurfing and underwater photography are ideal in these crystal waters.

This semi-desert area has a vast number of xerophytic plants, some of them endemic. One of the most outstanding plants is the dwarf fan palm, used for the park's symbol. This is the only native palm in Europe. We can also find here the pink snapdragon antirrhinum charidemi, the pale dianthus charidemi, jujube trees, wild olive trees, lentisc, Kermes oaks, saltworts, phragmites reed, the glasswort sarcocornia fructicosa and posidonia oceanica.

As a special protected zone for birds, the most noteworthy is its wetland birds found on the salt marshes, such as flamingos, grey and purple herons, storks, cranes and many species of waders like avocets, curlews, black-winged stilts and oystercatchers.

In winter there are numerous ducks, but in spring and autumn thousands of migrating birds stop here on their journeys between Europe and Africa, being the best place to see them is the viewpoint on the Gata Cape headland.

Plenty of reptiles can be found here, around 15 species such as Italian wall lizards - the only place where are found in Spain.

Mojácar is the largest resort on Almería coast. It is divided between the old town and seafront one, built alongside a superb sandy beach.

San José is a delightful small resort of 175 inhabitants with some of the most beautiful beaches in Andalucía. It is the centre of the Gata-Níjar Cape Natural Park Roquetas de Mar is a popular resort for tourists with a broad, sandy beach and many watersports activities and golf courses.