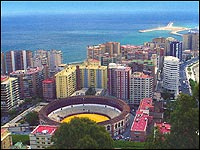 The city was founded by the Phoenicians. Later on, during Roman times, it became a confederated city of Rome.

The Moors occupied the city until 1487, when it was re-conquered by the Catholic Monarchs. Under the rule of the Moors, the city grew to become one of the foremost merchant centres in the Iberian Peninsula.

By the end of the 18th century and beginning of the 19th century, Málaga became the second most important industrial centre of Spain, due to the high-class bourgeoisie who had been formed, mainly the Larios and the Heredia families.

Málaga is today a world capital of tourism and continues to grow, thanks to the development of the Costa del Sol.

The museum is a 17th century Reinaissance building located in the Buenavista Palace. Christyne and Bernard Ruiz Picasso donated 155 works by Pablo Picasso to the Museum. Over 200 works of art, between paintings, drawings, sculptures, ceramics and etchings by Picasso and the Phoenician remains found during the renovation of the Palace are displayed in the museum.

La Malagueta bullring houses the Antonio Ordoñez Bullring Museum. It was built in 1874 in Neo-Mudejar style and has capacity for 14.000 persons. Here we can find an array of objects relating to this art.

The Museum was given its name in honour of Antonio Ordoñez, the legendary bullfighter from Ronda.

The museum is located in a building that dates back to the 17th century, in the former Victoria Tavern. This building was constructed on the site of another tavern, dating back to the 15th century.

The building has a square floor plan and the rooms are distributed around a central patio, which has a lower and upper gallery, supported by columns that end under a roof of Moorish tiles, giving it a picturesque aspect. This architectural structure is typical of that which prevailed in lower Andalusia.

This museum ensure the conservation and recovery of the ethnographic heritage, with the aim of showing the day-to-day life in Málaga and the province at its most characteristic levels, its customs and activities, as well as to recover objects that had been dispersed and were in danger of being lost forever.

La Alcazaba was the palace-fortress of the city's governing Muslims. It was built in the 11th century on the remains of a Roman fortress, on the summit of a hill. It has two walls several, defensive towers, three palaces in the upper part and beautiful gardens with several fountains.

The Alcazaba houses Archaeological Centre, where we will see numerous Phoenician and Muslims remains.

It is the best preserved Alcazaba in Spain.

Gibralfaro comes from the Arab word Yabal (hill) and from the Greek Faruh (Lighthouse). It was built in the 14th century by Yusuf I of Granada.

This fortress was built to protect the Alcazaba.

There is an interpretation centre in the old arsenal of the castle. This centre contains an exhibition reflecting life in the castle as a military barracks and coastal watchtower since 1487, when Málaga came under the Castilian Crown, until 1925, when Alfonso XIII handed it over to the city. It was a military establishment during those 483 years.

It was built in 1843 and it is very well conserved. It is the prototype of the press-house in the area of the Malaga Mountains. The "Lagar" is a building whose main part is dedicated to wine making. Here we can see the lagar (winepress), the fermenting room, the bread ovens, the oil press, patio, rooms with chimneys, the cellar, , etc. The superior part of the house was dedicated to living quarters.

It is in the heart of the Montes de Málaga Natural Park and belongs to the Junta de Andalucía's Ministry of Environment.

The Cathedral, also called the Cathedral of the Incarnation, contains almost all architectural styles from 16th to the 18th century. It was built in 1528 in the gothic style above a former Muslim mosque. It is unfinished as it is missing the top part of the main façade and the south tower is incomplete. For this reason people in Málaga call their Cathedral "The One-armed".

The interior has influences of the Renaissance and baroque styles. One of the most outstanding features on the inside is the 17th century choir stalls of mahogany and cedar woodwere, with 42 finely carved statues of saints behind each stall designed by Luis Ortiz. After his death the statues were completed by Pedro de Mena, one of Spain's most celebrated wood-carvers of the time. And also the two organs, rare examples of 18th century pieces which have over 4,000 pipes and are still in good working condition. Adjoining the cathedral is the Iglesia del Sagrado. It was built in the 15th century on the site of a mosque. It has got a gothic portal rebuilt in 1714. The interior is richly decorated and its main altar features a magnificent 16th century retable.

The Cathedral Museum is inside the Cathedral, in the former Cathedral Chapter Room, built in 18th century. The exhibits are displayed in two rooms with 19th century coffered ceilings and the works include objects from different places in the Cathedral.

It was created by Malaga Town Hall to disseminate and encourage reflection on modern art. It is located in the heart of the city, in the former Wholesalers Market, which was designed in 1939 by the architect Luis Guiérrez Soto.

The centre was created in 1989 to disseminate knowledge on the wealth and variety of marine life in the Alborán Sea by a group of people who loved sea, as well as to make visitors more aware of the need to take care of and protect our marine environment.

It contains a large number of aquariums and all sorts of marine flora and fauna and houses over 500 live specimens of around 100 different species. It is the only centre dedicated to the rescue of endangered sea animals, especially dolphins and sea turtles.

It also has exhibits featuring life at sea, containing a fishing boat, scale models, fishing tools and all the instruments required for navigation.

It is situated in Santa Ana Abbey, close to the Customs Palace. It houses a selection of paintings and sculptures of high artistic and iconographic quality between the 15th and 18th century. It also shows a careful selected collection of written and iconographic documents that form part of the Cistercian Order's identity.

It is an interactive museum and a centre for activities and dissemination for all related to the music. It contains a valuable collection of musical instruments from all over the world one of the largest private collections in Europe, with over 300 instruments from different periods, countries and civilisations.

During all year the museum organises an intensive cultural and musical programme such as classical music recitals to references, book presentations, musical cycles dedicated to specific themes or other events for a variety of styles, such as Jazz, Folk or Pop Music.

It is located in front of the Cathedral and comprises two palaces, one built in the 16th century and the other one in the 18th century. It has also two garden patios with a huge number of plants. Another part of the palace serves as a gallery or exhibition hall. It is a museum of religious art with an excellent collection of paintings and goldsmiths' works.

It's façade is one of the most beautiful in the whole city.

It is located on the first floor of the house in which the artist was born and lived the first years of his life. We can find ceramics, etchings and illustrated books.

It is located at the foot of the Alcazaba and was built in the 1st century B.C. in times of Augustus and was used until 3rd century. After that it was used as a quarry by the Moors to restore the Alcazaba, where Roman column shafts and capitals can be seen. In 1951 was discovered during the works to build a garden at the entrance of the Citizens' Arts Centre.

Opening in 1870 the theatre suffered a great fire that practically destroyed it. Later on the building was almost in ruins, because of abandonment and indifference.

In 1984, the Málaga City Hall acquired the theatre and started the renovations. Nowadays the theatre is to be celebrated for the wide range of performances that it presents to the public.

This park was created by the same time as the one of the "La Concepción". Open air concerts are held here every Sunday during the winter.

This tropical paradise of two hundred and fifty thousand square kilometres belongs to the Málaga City Council botanical institution. It was created at the beginning of the 1850's by Amalia Heredia Livermore, grand daughter of an English consul and wife of Marquis Jorge Loring, one the outstanding businessmen of the time, and enlarged for Echevarría- Echevarrieta's family. This garden contains one of the most important collection of tropical and subtropical flora of Europe coming from America, Asia, Africa and Oceania. In 1943, it was officially declared a historical and artistic garden. In 1990, the Málaga City Council bought the garden and was officially inaugurated on 20th June 1994. Its flourish plants attract thousands of birds that flock here to enjoy this natural heaven of 400 different tropical and subtropical plants, there are close to 500 palm trees of more than 25 species.

This Botanical garden located in Churriana was founded by Fray Alonso de Santo Tomás, Bishop of Málaga from 1664 to 1692.

It had three different parts and styles: the gardens, the orchard, the patio and the courtyard. Now it is also an ornithological park with cages all over the park. After Fray Alonso's death, the property was transferred to the counts of Villacazar, who through different and continuous enlargements made of it the most important private garden in Spain.

The orchard garden is the only remain of the XVII century. It is a parade forming a cross surrounded by fruit trees, in the middle of the cross there is a fountain decorated with Sevillian tiles.

The patio garden is adjacent to the building and formed by a large surface on one only level and totally paved with red earthenware tiles. In the middle of the patio there is an Italian fountain made in marble and worked in Italy and which motif is a triton embracing a mermaid.

The courtyard is organised at the Italian style with three full-size figures, two of them representing the rivers or streams and the third figure is a shepherd playing his flute and escorted by his dog. The three figures were carved by the malaguenian sculptor, Juan Chaez.