Córdoba province, with its whitewashed villages with Baroque churches, Moorish castles and flowered courtyards, is extremely varied, from rolling plains to forbidding mountain ranges with jagged peaks. This region is famous for its olive oil and for its dry white wines. 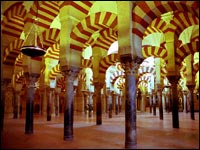 Córdoba greatest splendour was when it became the capital of the Moorish kingdom of El-Andalus, and this was when work began on the Great Mosque, or Mezquita, which became one of the largest in all of Islam.

The Mezquita of Córdoba was built in 785 AC on the site of an ancient Visigothic church, which had originally been the site of a Roman temple, by Abd-ar-Rahman I. It is the third largest Mosque and along with Granadas's Alhambra Palace is the finest example of Islamic Art in the Western world.

Abd-ar-Rahman II greatly extended the building during the 9th century. Under Abd-ar-Rahman III Córdoba became the largest and most prosperous city in Europe. His son Al-Hakim II doubled its size and the final enlargement came under Al-Mansour. The city was re-conquered by the Christians in 1236 and a Christian church was built within the walls of the Great Mosque and creating the unique mosque-cathedral. The Alcazar or Fortress was built in 1328 by the Christians. It contains beautiful gardens. This is where Columbus reportedly went to ask Fernando and Isabela to fund him in his search for America.

The Calahorra Fort was built by the Arabs and guards the Roman Bridge. La Judería, The Jewry, is Cordoba´s medieval quarter, once home of the Jewish community. It is a labyrinth of winding, narrow streets, shady flower-filled courtyards and picturesque squares.

During Fiesta de Los Patios in early May, homeowners proudly festoon their patios with flowers to compete for the city's most beautiful patio. 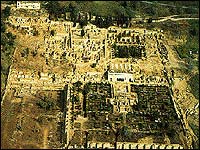 The Ruins of Medina Azahara are 8 km out of Córdoba. Medina Azahara was built in 1936 by Caliph Abdul Rahman III, as he needed a new residential town. It was built in 25 years and was used 4,300 columns from older buildings in all Mediterranean area.