Granada province is extremely variable in landscape and climate. You can climb the Iberian Peninsula's highest mountains, go skiing or go diving in the sea. 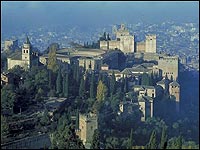 It was first settled in the prehistoric period and later colonised by the Romans, which called it Illibris. In 8th century the Arabs gave it its current name of Granada. In 1492 Queen Isabela and her husband Ferdinand re-conquered it, being the last Muslim city to fall t the Christians.

The Alhambra was built in the 14th century under the Nazari Dynasti at the foot of Spain's highest mountain range, the Sierra Nevada, and overlooking the city below. It is one of the most brilliant jewels of universal architecture. It contains a series of palaces and gardens of great value. At the centre of the Alhambra stands the Palace of Charles V.

The Cathedral was built in 1523 and is located in the centre of the Muslim area. It is the first purely Renaissance Cathedral in Spain. This Cathedral contains great values together with other valuable objects of the Cathedral Museum and Treasure. In front of the Cathedral you will find the Royal Chapel where the Catholic Monarchs lie buried.

La Cartuja was built in 1516 and is located in the north of the city. The Albaicin is located on the hill facing the Alhambra and is a labyrinth of narrow streets and whitewashed houses with secluded inner gardens. From Saint Nicolas' Square, the highest point on the Albaicin, we can watch a magnificent view of the Alhambra.

This coastline has a subtropical climate. It is no so known as the Costa del Sol. It has beach resorts with Spanish character, spectacular cliffs, secluded coves and sandy beaches. Here we can find a protected area, Acantilados de Maro-Cerro Gordo Natural Area, shared with Málaga province.

It goes from Nerja to La Herradura and covers1,815 ha. The rocky steep cliffs plunge down to the sea, leaving a few sheltered bays with beaches in between, which can be accessed via tracks.

Almuñécar is an attractive costal resort town. It has a seafront promenade divided into many sections by small coves and headlands, as it is typical in this part of the Costa Tropical. There is a Roman Aqueduct from the 1st century some kilometres inland from the town, following the river valley. It was still in use a few decades ago. La Herradura is a popular watersports resort located in a secluded bay.

Motril is the largest town on the Costa Tropical. It is a commercial town that benefits from the tropical fruit and flower producers in the area.

Salobreña is the jewel of the Costa Tropical. It is a whitewashed township clinging to huge lump of rock just back from the shoreline with a Moorish castle from 10th century on the top, its Mudejar 16th century church, Roman remains turned up everywhere and surrounded by sugar cane plantations. 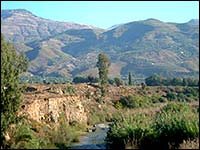 It is a chain of 50 or so villages with beautiful whitewashed houses and a distinctive Berber architecture, set in attractive valleys and surrounded by terraced fields. This region is located at the foothills of the Sierra Nevada. Villages in the Alpujarras that worth visiting are Bubión, Yegen, inmortalised by the british writer Gerald Brenan in the 1920s, Trevélez, the highest village in Spain, Capileira, Lanjarón, Órgiva, Pampaneira and Válor.

The park has a rich history, with the Tartessians, Visigoths, Romans and Moors all leaving their legacy in the area, which can be still be seen today; for example, the sophisticated irrigation systems inherited from the Moors and the distinctive architecture of the Alpujarras, with their flat-roofed houses, a design brought from north Africa with the Berbers. The Alpujarras have a long tradition of independence; the last Moorish king, Boabdil, famously sheltered here after the fall of Granada. It became the Moors' last refuge in Spain before their 1568 revolt failed and they were forced to leave Spain. 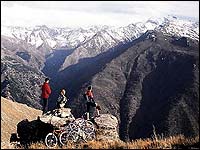 The Sierra Nevada is a protected area covering 86,208 ha of torrential rivers, sheer-sided gorges, stony screed slopes and glacial lakes between snowy summits. This is the highest mountain range in Europe after the Alps and also has the Europe's most southerly ski resort. The two highest peaks in the Iberian Peninsula are located in the park, the Mulhacén at 3,482 m and El Veleta at 3,396 m. This dramatic, rugged and extensive mountain range has some superb climbing and mountaineering opportunities.

It was declared a Biosphere Reserved in 1986 by Unesco in recognition of its exceptionally diverse plant, bird and animal species. The park is popular for the skiers and snowboarders resort, hikers, climbers and birdwatchers. In the southern foothills of the Alpujarras are cultivated cereal crops, olives, grapes, walnuts, apples and cherries. Trevelez is renowned for its cured mountain ham "jamón serrano".

We can find here the highest number of endemic plant species in Europa. More than 2,100 different species, over 120 of them endangered and around 70 species only found in here. The main trees found here are holms oak, chestnut and Pyrenean oak, pinessavin, commun junipers, gall oaks, native maple acer granatense and the Montpellier maple acer.