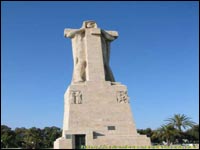 It is located in western Andalucía, bordering Portugal to the west. It is one of the least visited regions in Andalucía and therefore a unique place to explore. Here we can find one of Europe's most important wetland areas, the Doñana National Park. In the north of the province is the Sierra de Aracena and Picos de Aroche Natural Park, a protected area know for its famed cured ham from Jabugo. Another feature of this province is the Costa de la Luz, a long Atlantic coastline with miles of unspoilt beaches of golden sand continuing into Cádiz province. Christopher Columbus found here his crew and ship and set for the New World.

The mineral wealth of the area north of Huelva brought Phoenicians, Greeks and Romans who, along with the later arrivals of the Moors, left their archaeological mark on the city.

It is located on the mouth of the Odiel and Tinto estuary. There was already mining activity in Huelva in the Bronze Age, although there are also traces of prior human settlements. The hart of Taressos and its civilization was located here, in the confluence of both rivers. Later, Phoenicians and Carthaginians who worked the silver mines settled in the town. It has been an important port since them. The Romans called it Onuba. It reached its zenith in the 15th century, however, with the discovery of America by Christopher Columbus, who recruited local sailors for his voyage.

The centre of Huelva is a pleasant place with many pretty squares, absorbing historical monuments and a wealth of seafood bars and restaurants.

The La Merced Church was built in the 17th century and rebuilt again after the several earthquake Huelva suffered. It was designed a Cathedral in 1953. It is one of the best examples of Baroque architecture in Huelva province. It is situated in La Merced Square, an elegant square lined with tall palm trees.

La Iglesia de San Pedro is Huelva's oldest parish church. It was built in the 15th century on a hilltop site of a mosque and next to the remains of a medieval fortress. It is situated in Saint Peter Square. On the northern side of the church is the Cabezo de San Pedro, a wooded hill with good views over the city. The site has been declared a "Site of Historical Interest" due to the significant archaeological remains discovered in the Cabezo de San Pedro. These remains come from the Bronze Age. These inhabitants used it as a defensive enclosure and the Romans and the Moors later occupied it.

Huelva's provincial museum is located at Alameda Sundheim. It contains an interesting archaeological collection, with megalithic, Tartessian, Phoenicians, Greeks and Moorish objects. In the mining section are displayed objects of Roman mining activity and a huge Roman water wheel from Río Rinto used by slaves for drawing water out of the mines.

The Sanctuario de Nuestra Señora de la Cinta is a whitewashed 15th century chapel of Gothic-Mudéjar style. It is situated about 3 km north of the city centre on El Conquero hill. It has been declared a Site of Cultural Interest. It is famous for its associations with Christopher Columbus. Inside the chapel is an image of Huelva's patron saint, the Virgen de la Cinta, which was revered by Columbus and his sailors. Columbus visited the chapel before setting sail to the New World and prayed to the virgin, promising to visit again on his successful return

The Costa de la Luz in Huelva Province runs from the Guadiana river, that separates Portugal from Spain, to the Guadalquivir river. This part of the Atlantic coastiline boasts long, unspoilt sandy beaches backed by pine woods and sand dunes and many protected coastal reserves. The shoreline s punctuated by small fishing ports and moderns resorts.

Isla Canela and Punta del Moral beaches belong to the town of Ayamonte. These beaches of fine sand boast a tourist complex with golf, tennis and water sports facilities. Isla Cristina is a town with a rich maritime flavour and very well equipped for aquatic sports. La Antilla is a calm and very long beach belonging to the town of Lepe, famous for its fruit. It has a beautiful church from 15th century and next to the beach a huge tourist complex and a with a whole range of cultural and sports activities. Nearby is the sea port of El Terrón where fresh seafood and fried fish can be savoured.

El Rompido is a small fishing village dependant of the town of Cartaya. El Rompido boasts a magnificent beach with sand dunes and pine groves. This is the best view of the whole of the coast of Huelva.

Punta Umbría is the largest resort on the Costa de la Luz. It has magnificent beaches, great seafood restaurants and is on the edge of Odiel Salt Marshes Nature Reserve.

Mazagón beach has 10 kms of golden sands lying parallel to a cliff. Anational parador, campsites and hotels are found here. Matalascañas is the largest resort on Huelva's Costa de la Luz. Hotels, restaurants, discotheques and many other services are found here. It is surrounded by the Doñana National Park.

El Rocío is situated eighteen kilometres north of Matalascañas, on the northwestern edge of the Parque Nacional de Doñana. The village itself is located on the Rocío marshland where there are many birds. It is a curious Wild West hamlet famous for its annual Rocío Pilgrimage at Pentecost when it is overflowing with a seething mass of a million pilgrims with horses and decorated carts. The rest of the year it is a veritable ghost town.

It covers 184,000 ha of woodland of mainly Mediterranean oak. The landscape is full of contrasts and there is a rich varied wildlife with plenty of chances to spot birds of prey. It is famous for its rearing of black Iberian pigs seeing everywhere, under holm oak trees where they search for the acorns that give their ham its distinctive quality. We can find factories for curing the jamón Ibérico all over the Sierra.

The Sierra is dotted with small whitewashed villages. Aracena with its distinctive hilltop ruined fortress and a Knights' Templar church. Deep underground in the hillside are some spectacular limestone caves, the Gruta de las Maravillas.

Jabugo has become synonymous with jamón Ibérico. The ham is produced throughout the area, but the biggest producer is based here. Aroche is set in a dramatic position on a hilltop with its bullring within its castle's walls.

Río Tinto is situated further south in the foothills of the Sierra. Its mines have been exploited for five thousand years for silver, iron and copper. It has a fascinating mining museum and we can visit the largest open-cast mine in Europe. 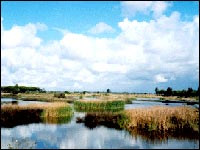 It is an immense area that covers over 1,300 sp km in the provinces of Huelva, Sevilla and Cádiz. Its configuration is a result of its past as the delta of the Guadalquivir river. It is one of Europe's most important wetland reserves and a major site for migrating birds, for winter visitors from north and central Europe and summer visitors from Africa. It has also one of the world's largest colonies of Spanish imperial eagles. It comprises three distinct kinds of ecosystem: the marshland, the Mediterranean scrublands and the coastal mobile dunes with their beaches.

It contains an incredible array of vegetation in a variety of virgin habitats and an unrivalled wealth of fauna; 125 species of birds are known to be resident here, as well as 125 migratory bird species. There is also a variety of mammals, 28 species in total, with some in danger of extinction, such as the lynx and the Egyptian mongoose. Game is also plentiful, with red deer, fallow deer and wild boar.

We can find plenty of information in the principal visitors' centre at El Acebuche. The nearest one to El Rocío is La Rocina, 500 m from the village and just off the Matalascañas road. Another one is the Centro de Visitantes José Antonio Valverde on the northern edge of the park at 30 km south of Villamanrique de la Condesa. In Sanlúcar de Barrameda there is another visitors' ventre, the Centro de Visitantes Fábrica de Hielo.