It is best know for its abundance of olive trees. It is the world's leading producer of olives and olive oil. The landscape of Jaen is dominated by olive trees inserted by whitewashed houses. 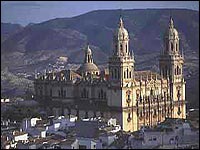 It is located in northern Andalucía. It is rich in history with great monuments. The first stable human settlements date from the Paleolithic. Iberians, Carthaginians and Romans also lived here. In this period it was called Aurigi. It enjoyed a great splendour during the Al- Andalus period. The Catholic Monarchs re-conquered it in 1246. Some magnificent monuments are the Cathedral, built between the 16th and 18th centuries, and the adjoining parish church. The city's Moorish castle has been converted into a Parador, sitting majestically on top of Mount Santa Catalina. The view of the city and the olive groves is spectacular from the top of the mountain. Beautiful churches as La Santa Capilla de San Andres, The Convent the Santo Domingo or The Church of La Magdalena between others. The Museum of Jaen Province possesses one of the Spain's leading collections of Iberian art.

It is a tiny and compact town well known for its outstanding monuments. Some of them are The Plaza de Leones is an attractive cobbled square enclosed by Renaissance buildings. The palace of Marquessa de Jabalquinto is the finest one and The Cathedral built in 16th century is of great value and, like many of Baeza's churches, has brilliant painted iron screens.

It is outstanding for is wealth of Renaissance palace and churches. The Plaza de Vázquez de Molina is a monumental square surrounded by magnificent building such as the Palacio de las Cadenas. Other splendid monuments are the Capilla del Salvador, The hospital de Santiago and the parador of Úbeda.

It is a very beautiful town with a impressive fortress. It suffered frequent battles between the Moors and the Christians. The Mota castle was built in 727 under the Muslim occupation. The Abbey church is another imposing building of Gothic and Renaissance style built between 1530 and 1627 and San Juan church built in 16th century and located on the hill of the top.

It has traditionally been the only natural pass between Castile and Andalucía. It covers 87,649 ha and belongs to Sierra Morena mountains. Some believe it owes its name to a legend that says that, after the Battle of Las Navas de Tolosa, the captive Arabs were thrown down the mountain. It could mean the throwing over a cliff (despeñar) of the dogs (perros, or the Moors) and other believe the name comes from cliff themselves, the despeñaderos or precipices. It is mostly a rugged terrain and includes the spectacular Los Órganos Natural Monument, a rock shaped like a giant church organ, as well as caves, waterfalls and precipitous slopes. It breaks the uniformity of Sierra Morena with its impressive rocks and vertical cliffs and it used to be one of the main routes into Andalucía from the north and Madrid. Today the A4 motorway and the Cadiz-Madrid railway line cross it. There is a log history of human occupation in the park. Here has been found Neolithic remains, primitive paintings cave and Iberians small bronze statues for votive offerings.

Several fierce battles has been taken place here, the most famous was the Navas the Tolosa battle fought between the Muslim and the Christians in 1212, being one of the most decisive battles in the history of Andalucía, because the Christians paved the way for the reconquest.

Here we can find woodland of cork, gall and holm oaks, Kermes oaks, myrthe, lentisc, wild olive trees and roses. We can also find mammals like the wolf, the Iberian lynx and the wild cat; birds of prey such as the Iberian imperial eagle, the golden eagle, the goshawk, the eagle owl and vultures; as well as other animal species such as deer, wild boars, genets, stone martens and mongooses. You can find plenty of information in the park's visitors' centre on the A4 at km 257. 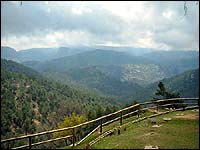 It is located in eastern Jaen province. It covers 209,920 ha being the Spain's largest protected area. It was designated a Unesco biosphere reserve in 1983 and created a natural park in 1989.

Here we can admire magnificent waterfalls, sheer-sided gorges and many lakes and reservoirs. Two of the Iberian Peninsula's most important rivers have their sources here, the Guadalquivir and Segura rivers. Its botanical importance within Andalucía is matched only by the Sierra Nevada. It contains a number of Tertiary relict species not found any where else in the world. In these mountains you can climbing, caving, mountaineering, hang-gliding, paragliding, fishing, canoeing, mountain biking expeditions, hiking and horse treks.

You can find plenty of information in the two visitor's centres, one in the Centro de Visitantes Torre del Vinagre at km 18 and the other one the Centro de Interpretación Fluvial Río Borosa, near Torres de Albánchez at km 47 and in the tourist information office in Cazorla.

It contains around 1,300 species of plants, between them 24 native flora, 2 endemic species. Pines have been the predominant vegetation in this area for over 10,000 years and has some of the pines in Spain. One of the park's major attractions is its abundant and varied wildlife, although bears, wolves and game species like deer and wild boar died out here.