Cave of the Treasure

It is situated 12 kilometres from Málaga, in the La Cala del Moral area of Rincon de la Victoria. It is the only visible marine cave in the whole of Europe. It has underground caverns and pools. Man first settled here in the Palaeolithic period, between 35,000 and 10,000 years ago where they left on the wall animal paintings.

The cave is know as the "Treasure Cave" because it is said that five Muslims were persecuted by the Christians and hid their possessions there. Many treasure hunters have tried their luck over the years including Don Manuel Laza who spent 35 years of his life.

It rides 769 metres above sea level, 15 minutes journey and takes us from Arroyo de la Miel to the peak of Mount Calamorro. There a variety of activities await us. In a miniature bullring, the Andalusian horse shows of its equestrian art, skilfully guided by the hands of its rider, in expert in country dressage.

It houses prehistoric creatures which have miraculously survived 200 million years of evolution. These carnivores from the same time as dinosaurs use the same hunting techniques. Here we can find over 300 crocodiles from 12 different species including the massive Giant of the Nile and "Big Nose", a 77 year old crocodrile which measures nearly 5 metres. There are also a museum, a crocodile's nursery and a mini zoo especially for children.

It is located in Puerto Deportivo de Benalmádena (Puerto Marina). It houses over 5,000 different creatures from the Mediterranean Sea, the Atlantic, Indian and Pacific Oceans, Red Sea and from the Amazon.

This adventure park is located in Estepona.

It is located in Benalmádena

It is located in Benalmádena

The Caves of Nerja

This National Monument was found by chance on January 12th, 1959 by five boys from Maro. They found a narrow access to a cave, after having been inhabited for millennia in Prehistoric times, had been closed because of the shifting of the terrain.

The caves are a rocky formation of crystalline dolomites with more than 250,000 years of age. Only a third of the cave is open to tourists. It is 4,283 metres long and has three points of entry, two of them natural and one constructed in 1960 for tourists. The cave cam be divided into three sections: The Lower Galleries or The Show Cave, The Upper Galleries and the New Galleries.

Their capricious rocky formations can be likened to Modernist Cathedrals. It has eight rooms. One of them is the room of Cataclysm, with the biggest natural column in the world, 49 m. high and with a diameter of 18 m., another one is the room of the Cascade, with capacity for a stage and 600 seats, where every year in August the Festivals of Music and dance take place.

Cave of the Basin

The Cave de la Pileta is located in Benaoján, on the route between Gaucin and Ronda. It contains remarkable prehistoric paintings of animals in a series of caverns, dating from around 25,000 B.C.

The cave is situated at 670 m. of altitude in the south slope of the boulder of Las Mesas, a rocky hill located between the mountain range of El Palo and the one of San Diego, which runs parallel to the Guadiaro's river, fitting its bed to the south of Benaoján.

The cave doesn't have installed artificial illumination, reason why the visitors are provided with a portable electrical lamp. Generally a member of the Bullón family, owner of the cave, guides the visitors.

The cave is in a vantage point, where you will enjoy excellent views, a rough land underlining the singular plain that opens tour feet down hillside, the valley of the cave. 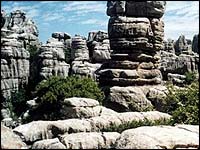 In 1989, this area was granted the classification of Natural Park. With its almost 12 km under protection, it represents one of the most important karst landscapes in the whole Europe It form part of the limestone arc of the sub-Betic sierras.

The Torcal is the result of the erosion of limestone rock that originated on the seabed during the Jurassic period, about 150 million years ago.We can find four geomorphologically distinct areas: Sierra Pelada, Torcal Alto, Torcal Bajo and Tajos and Laderas. They all together make up a genuine museum of natural sculptures, modelled by Nature over the years. The Torcal has also an important botanical interest, with more than 650 species of plants, representing almost 100 families.

We can admire the wonderful views of Villanueva de la Concepción, the region of Campanillas river and Málaga from the viewpoint of Las Ventanillas, and it is even possible to see the African Coast on clear days. 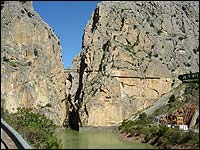 It is protected area of 2,016 hectares. It is located in the interior of the Subbetica mountain range and creates a spectacular landscape. There is an impressive gorge through which Guadalhorce river flows between enormous slabs of stratified limestone. Its walls, with its up to 400 metres high, are home to a variety of plant and animal life, adapted to a vertical way of living.

In the higher zones we can find mountain goats. We can also see blackbirds and swifts near the water. Falcon, kestrel, goshawk and other medium-sized birds have their home in the middle section of the gorge. The peaks are nesting areas for large birds of prey such as the golden eagle and tawny vulture. Other inhabitants are the wild cat, the genet, the dormouse and the mongoose.

The King's Path (Caminito del Rey) is a small iron path hanging over the "Desfiladero de los Gaitanes". It was built between 1901 and 1905 and its name stems from being crossed in 1921 by Alfonso the 13th when he came to inaugurate the Dam of the Conde del Guadlhorce in 1921. It was built to connect the "Salto del Chorro" and the "Salto del Gaitanejo", both belonging to the Hydroelectric Society of El Chorro to enable workers to move easily from one to the other. The Desfiladero has been gradually deepened by the river in successive stages.

This structure, clearly visible from the railway, leaves every visitor full of admiration for the risk involved in building it and its picturesque scenery viewed from there.

There Roman remains, called las Bovedas (the domes) are situated close to the entrance arch from San Pedro de Alcántara, towards the beach. They are next to the Paleo- Christian Basilica, Vega del Mar.

They are the remains of the Roman settlement called Cilniana, destroyed by an earthquake in 365 A.D.

The museum is located in the Palace of Naiera. It is a walk through the history. Various rooms dedicated to painting, archaeology, sculpture and goldsmith works are displayed here and give us an idea of the proud history of Antequera. It includes the "Efeb", a 1st century Roman bronze measuring 1,54 metres of a boy wearing a garland of flowers.