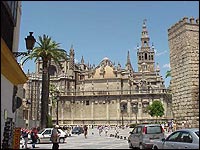 Most of the province's landscape is dominated by the Guadalquivir river, one of Spain's most important rivers. Seville city is set in the heart of the river valley and many of the province settlements are scattered around the gently rolling Guadalquivir river plain, planted with patchwork field of wheat and olive groves. You can also wander around the Sierra Morena's countryside. This area was largely in hands of a few landowners and today the land is still divided up into huge farm estates.

Sevilla is the Capital City of Andalucía and the largest city and its administrative centre. The legend says that Seville was founded by Hercules and its origins are linked with the Tartessian civilisation. The Romans called it Hispalis and the Moors Isbilya. Its high point in its history was following the discovery of America. Sevilla is situated on the banks of the Guadalquivir river and is one the largest historical centre in Europa. It is the city of Carmen, Don Juan and Fígaro.

The Cathedral of Seville, formally Catedral de Santa María de la Sede was built from 1402 to the 16th century. It is the largest cathedral. It is 76 by 115 meters and its central nave rises to an awesome 42 metres and even the side chapels seem tall enough to contain an ordinary church. Its main altarpiece is considered the largest in the Christian World. It occupies the site of a great mosque in the 12th century. Later, Christian architects added the extra dimension of height. The interior is lavishly decorated with a large quantity of gold evident. In the main body of the cathedral only the great box like structure of the choir stand out, filling the central portion of the nave. The Capilla Mayor is dominated by a vast Gothic altarpiece comprised of 45 carved scenes from the life of Christ.

Pierre Dancart's masterpiece and possibly the finest altarpiece in the world dedicated his life in this masterpiece, the largest and richest in the world andone of the finest examples of Gothic woodcarving anywhere. The Cathedral also has a large collection of religious jewelry items, paintings and sculptures, along with the tomb of Christopher Columbus. The Giralda, originally a minaret, was converted into a bell tower, topped with a statue representing Faith.

El Patio de los Naranjos is located just outside the Cathedral and dates back to Moorish times when worshippers would wash their hands and feet in the fountain before their daily prayers.

The Alcázar seems a Moorish Palace, in fact, some of the rooms and courtyards seem to be straight from the Alhambra. Pedro the cruel of Castile built the palace employing workmen from Granada and utilising fragments of earlier Moorish buildings. It is the best surviving examples of Mudejar architecture.

Italica is located less than 9 km to the north of Seville. It was one of the Roman Empire's most important cities founded in 206 BC. Today still survive the amphitheatre and some remarkable mosaics.

Others Seville's treasures are the Casa de Pilatos, The Town Hall, Archive of Indies, where the historical records of the American continent are kept, the Fine Arts Museum, the second largest picture gallery in Spain, convents, parish churches, palaces, La Maestranza bullring, the Plaza de España and María Luisa park.

Some villages of Seville

In the Sierra Norte Natural Park, part of the immense Sierra Morena, are some of the prettiest villages overlooking the undulating slopes covered with holm and cork oaks and Mediterranean shrubs. The most appealing village is Cazalla de la Sierra, a whitewashed jumble of houses around a huge church. Outside the village in a magnificent hillside is a restored monastery, La Cartuja de Cazalla. Écija is one the province's most architecturally outstanding village located in the rolling farmland east of Seville. It lies on the Genil river and is the hottest place in Andalucía.

Alcalá de Guadaira is overlooked by its massive walled Moorish fortification. Estepa has many Baroque mansions and testament to its great wealth in the 19th century. Morón de la Frontera was one an important Moorish city state. Today it is famous for its flamenco festival.

Utrera, one of the southern towns of the Guadalquivir river plain, worths a visit for its monuments and nearby wildlife site. It has a few gothic churches and a nature reserve. Lebrija is a walled town which holds one of the Andalucía's most popular flamenco festivals in July.