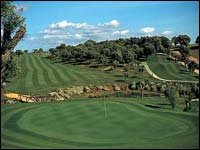 Benalup, which opened in 2001, is a pioneer in the sense that thanks to the vision of owner Bernard Devos the Andalucian golf trail now opens across country in the hitherto virgen territory of the "Ruta del Toro" between Jerez and Sotogrande. Benalup, in fact, sits at a crossroads also reached from the Atlantic coast at Chiclana. The result is that more developments of this nature are to be expected in the area. Benalup is an up and down country course with water hazards and fabulous views.

The clubhouse has now been completed, a hotel is under construction and there will be a limited number of homes, though these are to be built well back from the course itself. The course is the first to be seeded with "Terracottem", a water-saving capsule invented by Devos.

How to get there
From the N-340 towards Algeciras near Continente, km. 110 turns right towards Los Barrios/ Jerez. Benalup is reached from a turn- off some 15 kms. further on.