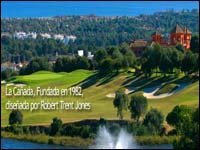 This is the story of the village that wanted a golf course. When they got one of nine holes they asked for more, and more. Guadiaro used to send its men to the fields then along came Sotogrande. They became green keepers and took up golf. Before long there were more golfers in Guadiaro that in any village of its size in Spain. They hacked out a mountainside track and the kids practised near the football pitch. Jaime Ortiz Patiño got interested, the municipality gave the land, Robert Trent Jones Sr. did the design and La Cañada was built.

Over a decade later, with a lot of financial help from the First Tee programme and JOP, the second nine holes was opened, this time designed by Dave Thomas. Now that's some municipal golf course. And now there's the clubhouse.

How to get there
Going from Algeciras take the exit for Guadiaro at km. 133. From Marbella take the Guadiaro exit at km. 135.