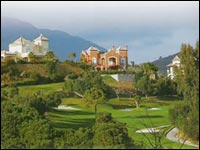 Designed by Antonio García Garrido and former Ryder Cup player and two-times World Cup champion Manuel Piñero, La Quinta offers panoramic views over Marbella's Golf Valley. A successful round on this course requires not only accuracy in order to avoid its trees, water hazard and the large, albeit shallow, sand traps along the fairways, but also starmina, for it is unforgivingly up and down. Deeper bunkers lie in wait for stray approach shots to the greens. The most difficult hole is considered to be the long 15th with its dogleg to the left. Since it first opened La Quinta has added an extra nine holes and replaced several holes on the original course.

The third loop of nine, which can be played either separately or together with the other course, leads you back to the clubhouse past the Piñero- managed golf school near the 6th hole. The club house is one of the best equipped on the coast. La Quinta is developing a reputation as host of the prestigious charity Pro- Am Protagonistas tournament.

How to get there: You can get to the club in three ways. First, by taking the N-340 to Puerto Banús and heading up towards the Nueva Andalucía bullring, thereby ending up in the Golf Valley.