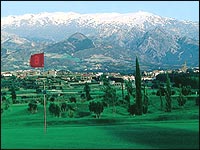 Granada Golf, just eight kilometres outside the ancient city of Granada, is a mainly flat course, not overly long (6.037 metres off the back tees) and with few difficulties. But players should not be lulled into a sense of overconfidence, for the 15th, 16th and 17th holes all feature daunting water hazards in the from of three lakes which supply the course's automatic irrigation system. Open since 1986, this members' club welcomes visitors.

How to get there: Going from Granada, take the road towards Armilla and proceed from there to Las Gabias. The golf course is about 7 kilometres from Granada.