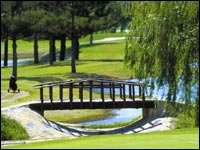 Mijas Golf, probably the busiest and most popular golf complex on the Costa del Sol, has two 18 - hole courses of which the older is Los Lagos, first opened in 1976. Designed by Robert Trent Jones, it features wide fairways, large raised greens and an abundance of bunkers and water hazard. Los Lagos was aptly named for there are eight lakes in and around the course. Nonetheless, there is virtually no rough and relatively few trees, giving an overwhelming impression of freedom and space. At 6,348 metres, Los Logos is on of the most popular in Andalucía.

How to get there: Take the Fuengirola - Coín turnoff and follow the road called Camino Viejo de Coín. The golf course is about 3.5 kilometres from the highway.