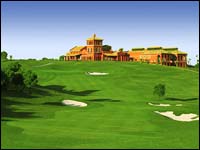 Inaugurated in 2003, this course is located in a beautiful part of the heights of macro- urbanisation Sotogrande, characterised by native vegetation of Mediterranean pine, olive and cork trees. Designed by Cabell B. Robinson, a Robert Trent Jones disciple for 20 years, La Reserva de Sotogrande is surrounded by two valleys. The layout includes four lakes, with water on six holes, though only coming into play on one. Constructed according to USGA norms, the greens can be characterised by their ample size and variety of form, the same as the bunkers. Robinson is convinced that La Reserva will be considered one of the best courses in Europe.

How to get there
From both Marbella or Algeciras turn off at km. 133 and take the 130 exit marked Sotogrande- Guadiaro- Castellar.