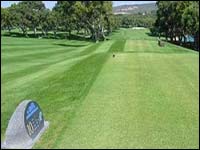 Owner and President Jaime Ortiz- Patiño took less than 10 years to create a legend. He took over Valderrama in 1987, applied the knowledge, he had learnt at the USGA, from its greens superintendents and agronomy sections, and, by 1997, was proudly welcoming the King of Spain to the Ryder Cup opening ceremony. In the meantime he had hosted nine Volvo Masters and gained respect from Europe´s top players who, it must be said, were at first sceptical about his efforts.

Valderrama became Europe´s No. 1 course. For Andalucía it has become the standard-bearer, a prestigious resource that tourism authorities are proud to boast about. The course was designed by Robert Trent Jones Sr., who said, "I think Valderrama is a classic championship golf course. It's like Augusta… in about as good condition as any golf course can get".

Valderrama´s challenge is limited to club members and 36 visiting golfers per day but it is nevertheless an irresistible challenge. In a Golf Digest world, survey golfers were asked to name the one course they'd play for the rest of their lives. Augusta was first. Second came Pebble Beach. And third, Valderrama.

How to get there
From both Marbella or Algeciras turn off the N-340 at km. 133 and take the exit marked Sotogrande- Guadiaro- Castellar.